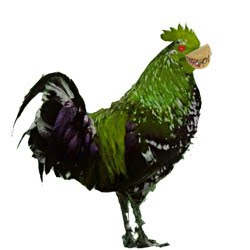 Harry Potter fans are familiar with the "boggart", a shape-shifting magical creature whose true appearance is never seen, but which seeks one's worst fear and takes its form. If you're a wizard terrified of killer chickens that peck people to death, that's what you would see when a boggart came your way. To get rid of it, you (a competent wizard with a fear of killer chickens) would think of something silly (or sillier) to turn that killer chicken into - like a killer chicken with a taco where its beak should be - and then you'd point your wand at it and say, "Riddikulus!", and voila! you have a taco-beaked chicken to laugh at. And laughter does a boggart in.

For me, a boggart might look like my beloved wife-partner, Jennifer, coming home from Exceptional Woman, looking at me and saying something like, "You're worthless to me. Everything I want gets ruined because of what you do. I want a divorce." I don't believe she would say that, but playing with it, the thought of building something up for so long and then have it crash down around me is overwhelming. If all my efforts were to end up self-destructing, I could come to the conclusion that life will forever suck for me.

It seems that discomfort almost never just vanishes, all by itself. Reflected in this attribute of discomfort, our dreams generally don't come knocking on the door, out of the blue saying, "Hi! I've come true!"

What do we Muggles (non-wizards) do with our "boggarts"? There aren't any functional wands in our Muggle world, that I know of... What if we, for a moment, let go of everything we are perceiving - even our discomfort, be it fear or anger or disappointment? Ahh, but it doesn't just go away. Right! The Option Process® Dialogue to the rescue!

My dream is to love (and to be happy with) all of the time, no matter what - and I'm going for my dream! Hence I'm thinking to conjure up a way of saying "Riddikulus!" for myself. The gift of ease works for me if I haven't gotten in the flow of being uncomfortable. It ain't happenin' once I'm fully feeling fear or anger. OK. So, let's say my boggart is right in front of me. Can I, instead of dwelling in my fear, flip it into a dream? Woah. Huh? Say what???

Even from full steam anger, I can choose to click into my dream of loving / being happy with. Right now, I'm going to love myself. How am I going to love myself? Back to the boggart that looks like Jennifer, I can be useful to myself and ask some clarifying questions, rather than cower in fear. I can trust myself (and a benevolent universe) to make the right moves, rather than "futurize failure". I can choose happiness, instead of plunging into a self-constructed abyss. Later, when I have a chance, I can explore this moment (and its gifts) in an Option Process Dialogue.

More and more, I find that loving myself (even owning that I am a MuggleBlogger) isn't ridiculous.
Posted by David Borishansky, Son-Rise Program Dad

Email ThisBlogThis!Share to TwitterShare to FacebookShare to Pinterest
Labels: Calm Amid Chaos, Happiness Is A Choice, Option Process Dialogue