That's Just How It Is, Daddy. 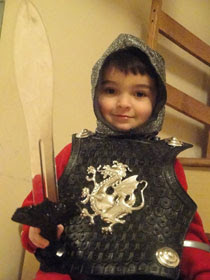 My recently-turned-5-year-old son, Devin, was sick this week. One day, he had just lost his voice, felt chilled, had the sniffles. We got cozy together with some tea in front of the computer for an episode of Dora the Explorer, I responded to one of Dora's questions to the viewer. "Map!", I said.

Ha! So simple and straight up! "That's just how it is" could be seen as another way of saying that it's not effective to try to change something (the stimulus) when we're uncomfortable with it. But having heard Devin recently respond to a TV-initiated question, I was a little surprised by his clarity and awareness -- until I thought about it. Dev chooses to play along, in order to have more fun. It's not about intentionally deceiving himself -- it's about making the most of the present situation in a positive way: Devin's way.

The obstacle in choosing happiness is often in DOING IT, particularly with things (stimuli) that, historically, we might pump up into what feel like Weapons of Mass Discomfort. It is with these stimuli that it is so useful to be crystal clear that "that's just how it is" and that the thing to change isn't everything else, but me. For me, there can be no internal debate, since that distracts from the issue at hand until it gets pushed to the background, forgotten.

I love The Option Process for disengaging my initial instinct to fight: to challenge the challenge. To go with that instinct is to follow myself into a losing battle. As a performer, I used to visualize myself playing the violin as if I were a shadow of myself hovering by the ceiling at the back of the room, concert hall, or whatever the venue was. From there, I could get a clear read on what I sounded like, looked like, as an observer. That's what a self-dialogue feels like: detaching from myself and observing - not to be critical, but to be helpful. With that distance, objectivity becomes a possibility. Like Diane Fossey among a group of gorillas, any of us can come to solve mysteries of how we behave as individuals and with others. Finding these answers about ourselves forms the basis of an attainable superpower - THE POWER TO CHANGE OURSELVES INTO WHO WE WANT TO BE!

So, next time you or I start to fight or flee a challenge (or talk ourselves out of doing an Option Process Dialogue) we might just choose to remember that the challenge at hand is "just how it is", and that it is an opportunity to give the gift of the Option Process to ourselves. Wahooo!!!
Posted by David Borishansky, Son-Rise Program Dad